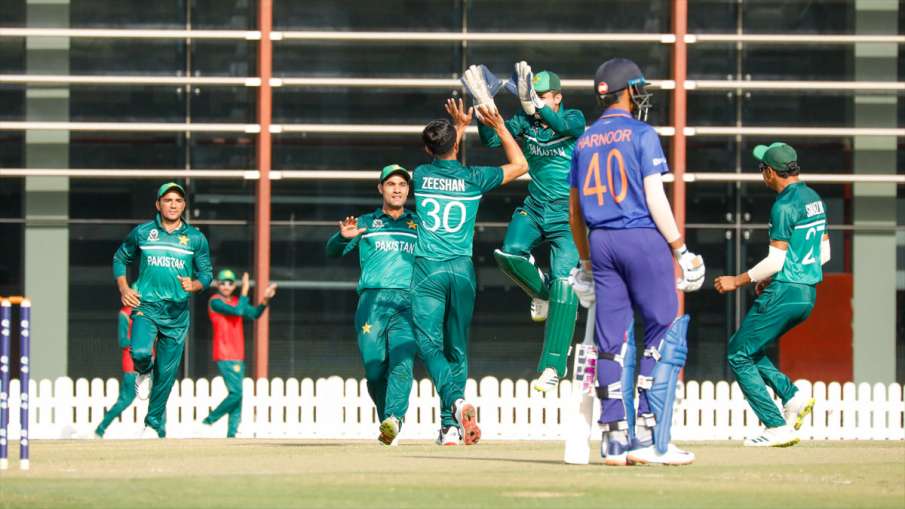 India U19 vs Pakistan U19 highlights: Pakistan won the toss and invited India to bat first. The match was played at the ICC Ground Academy 2 in Dubai.

India’s Under-19 cricket team has suffered a defeat against Pakistan in its second match of the Asia Cup 2021. Chasing the target of 238 runs set by India, Pakistan’s team won the last ball.

Earlier, India had scored 237 runs while batting first. Pakistan scored 240 runs for the loss of 8 wickets and won by 2 wickets. Pakistan needed 2 runs off the last ball to win. Ahmed Khan hit a four off the ball of Ravi Kumar to give victory to his team. Raj Bawa took 4 wickets for India.

For India, wicketkeeper Aradhya Yadav played the highest innings of 50 runs while opener Harnoor Singh was dismissed after scoring 46 runs off 59 balls. Zeeshan Jamir took 5 wickets for 60 runs in his 10 overs spell for Pakistan.

Raj Bawa gave the sixth blow to Pakistan by catching Rizwan Mahmood at the hands of Raghuvanshi. Rizwan was dismissed for 29 runs off 34 balls. He hit 4 fours in his innings.

Pakistan lost the fourth wicket at the score of 114

The fourth blow to Pakistan came on the fifth ball of the 29th over. Nishant Sindhu gave India the fourth breakthrough by dismissing captain Kasim Akram lbw. Akram was dismissed for 22 runs off 40 balls.

Pakistan had a very poor start. Not even a single run was added to the total score that opener Abdul Wahid was bowled by Rajvardhan Hangargekar and gave a big blow to Pakistan. Wahid could not even open the account. After this Maj Sadaqat and Muhammad Shahzad took over the innings. Both shared 64 runs for the second wicket. Sadaqat was caught by Raj Bawa at the hands of Sheikh Rashid and gave another blow to Pakistan. Sadaqat was dismissed for 29 runs off 45 balls. The third blow to Pakistan was also given by Bawa, who made wicketkeeper Hasibullah walk on a personal score of 3 runs.

Earlier, India did not start well either. Only one run was added to the total score that India had lost their first wicket. Opener Angkrish Raghuvanshi was caught by Zeeshan Jamir at the hands of Hashibullah, giving India the first blow. Raghuvanshi could not even open the account.

Harnoor Singh scored 46 runs off 59 balls while Rajvardhan scored 33 runs in 20 balls. Raj Bajwa scored 25 runs off 59 balls while Kaushal Tambe contributed 32 runs off 38 balls. Captain Yash Dhul could not even open the account. The entire Indian team could not even play 50 overs. India scored 237 runs in 49 overs. Awaish Ali took two wickets for Pakistan while Akram and Sadaqat took one wicket each.

India beat UAE by 154 runs in the first match

Harnoor made 120 off 130 balls while skipper Yash Dhul added 63 runs in 68 balls. Rajvardhan Hungargekar scored an unbeaten 48 off 23 balls. UAE tried nine bowlers but could not stop India from scoring big.