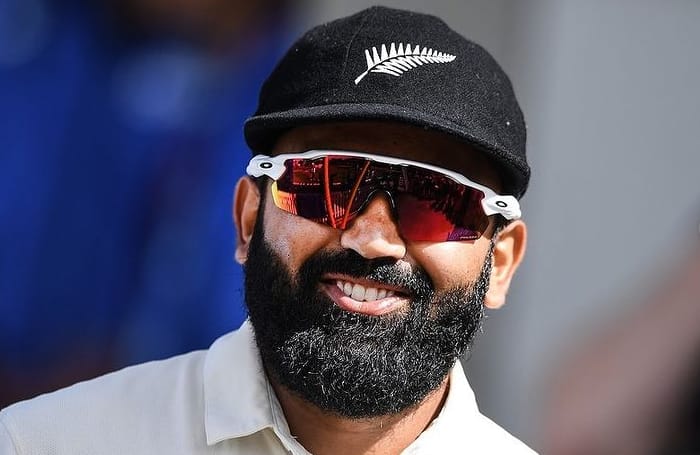 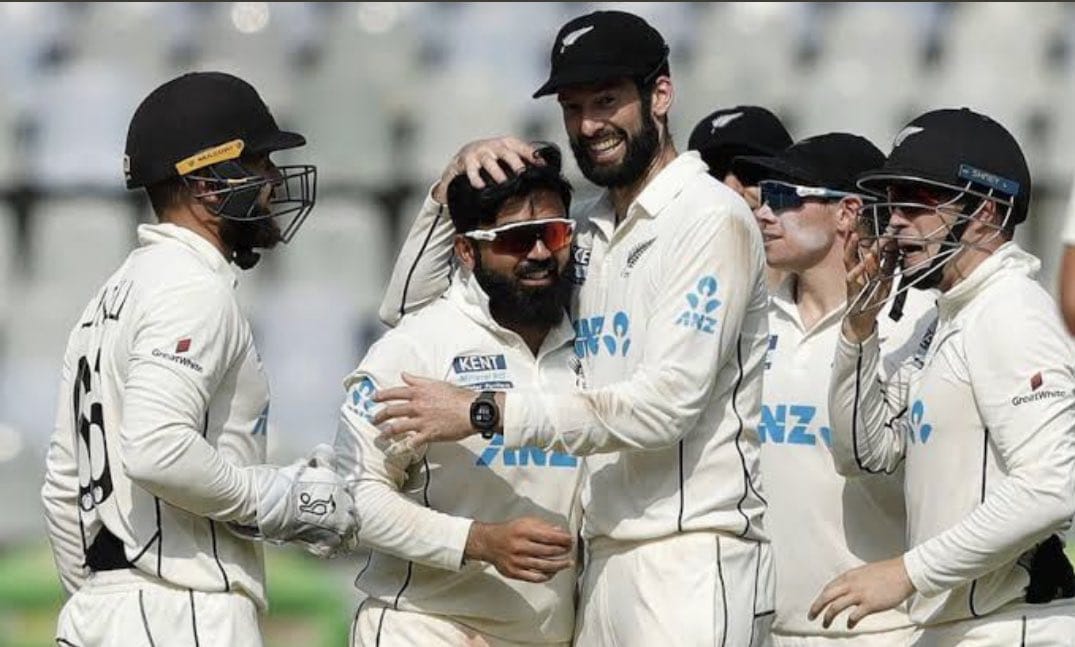 Ajaz Patel was born on 21 October 1988 in Mumbai, Maharashtra. Ejaz’s father Yunus Patel used to work in refrigeration and had his own shop. Ejaz’s mother Shahnaz Patel used to work as a teacher in a school. Ejaz also has 2 younger sisters, one’s name is Tanzeel Patel and the other’s name is Sana Patel.

Ajaz’s family belongs to Gujarat. But Ejaz was born in Mumbai (Maharashtra). His family lived in Jogeshwari (Mumbai) and Ejaz did his early education from Mount Mary School, Goregaon West.

1996, when Ajaz was only 8 years old, his family moved to Auckland City (New Zealand). There, his father started a shop and settled there. Later, his uncle got him admitted to New Lynn Cricket Club, a suburb of Auckland.

Ajaz Patel started his cricket career by playing as a fast bowler for the Auckland team. One day suddenly while playing domestic cricket, he started bowling spin. For which he got a lot of encouragement from former New Zealand cricketer Deepak Patel. After this Deepak helped Ejaz a lot with his spin bowling skills.

On 7 December 2012, Ajaz made his debut for Central Districts in New Zealand’s home T20I series against Wellington. He conceded 37 runs in his 3 overs with the highest economy of the match of 12.33.

3 days after his first T20I match, Ajaz made his first-class debut against the same team in the Plunket Shield Series, taking 3 wickets in his first match and overall for his team in both innings. Contributed 7 runs for

On 27 December 2015, Ajaz made his List-A debut playing in The Ford Trophy against the CenterBury team. In which he contributed 4 runs without getting out and bowled 4.4 overs without taking any wicket.

Ajaz Patel played his first international cricket T20 match against Pakistan on 31 October 2018. In which he took 1 wicket for 27 runs in 4 overs.

After this, on 16 November 2018, he started his Test career while playing against Pakistan. In the first innings of this match, Ajaz also took 6 runs in 43 balls and 2 wickets for runs at an average of 2.66. While playing in the second innings of the same match, he also took 6 runs and 5 wickets without getting out. Ajaz was awarded the Player of the Match for taking a total of 7 wickets in his very first match.

Team India became a puppet in front of Mumbai-born Ajaz Patel, left India at the age of 8, now after 25 years left this feat in childhood Country, revenge disguise and tongue, now a storm has brought in the Indian camp.

Ajaz Patel took all 10 wickets of the Indian innings 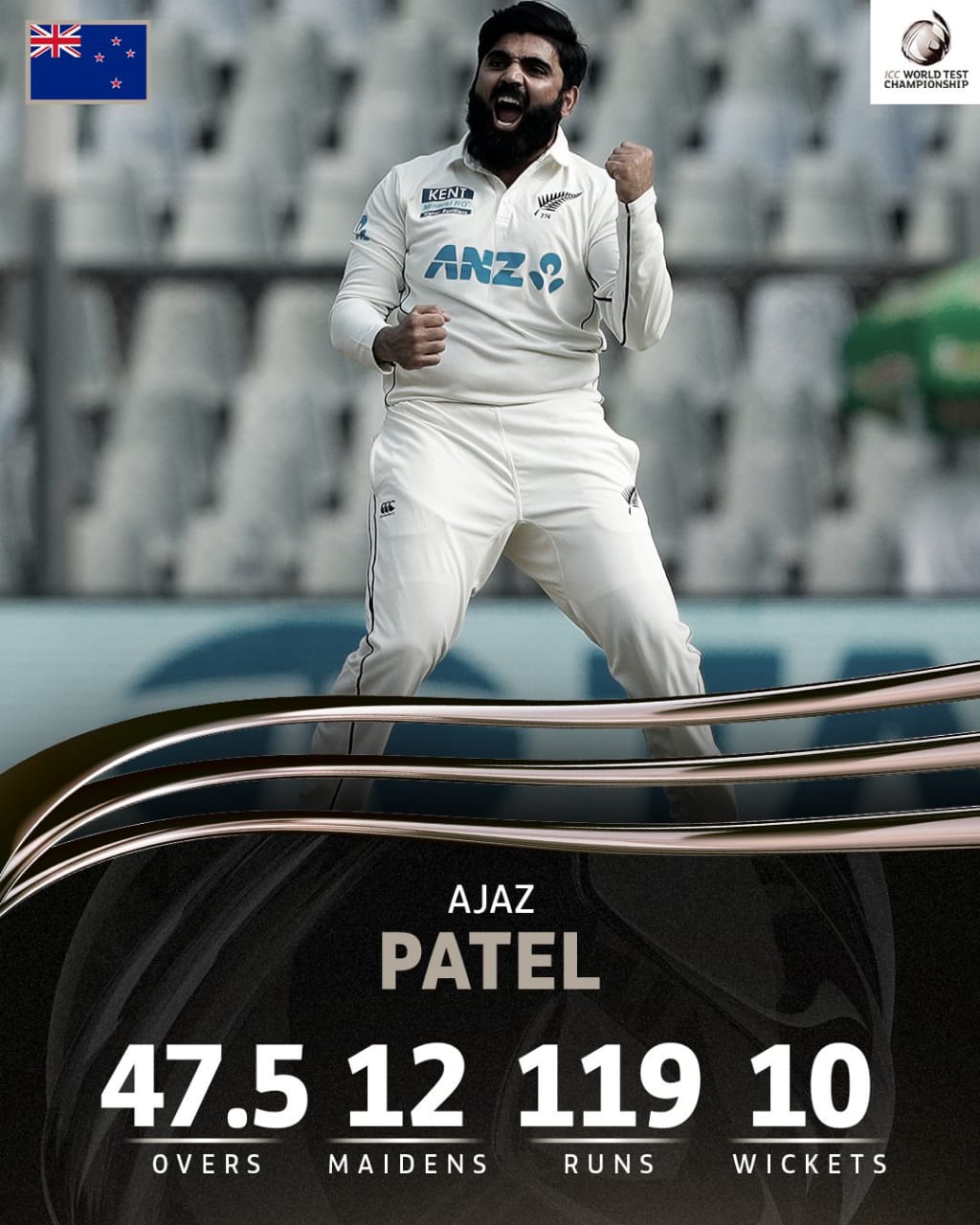 Indian-origin Ajaz Patel, playing for New Zealand, has set a new record by heaping India for 10 wickets today, he has become the third player to do so, after 25 years of being born in Mumbai, he did this amazing at the place of his birth. On the first day of the second test match against India, the New Zealand bowler who made a splash, is a player of Indian origin, we are talking about Ajaz Patel.

Wellington, mid-day. Ajaz Patel on Ind vs NZ: The first match of the two-match Test series between India and the host New Zealand team is being played at the Basin Reserve ground here. In this match, a player is also playing for the host New Zealand team, who is born in Mumbai, which is called the financial capital of India, and it is here that he spent his childhood. We are talking about Ajaz Patel.

Mumbai-born left-arm spinner Ajaz Patel has admitted that he never thought he would play against the Indian team one day before entering the match against India. During an event on Wednesday, 31-year-old Ajaz Patel said that playing against India is the unique moment of his cricketing career. Not only this, he has also revealed that he likes Indian team all-rounder Ravindra Jadeja very much.

‘Never thought I would play against India’

Ajaz Patel has said, “It is a huge opportunity for me to play (playing) against India. I never thought that I would ever be able to play against India. . Even so early that not many matches were scheduled against him.” Ajaz Patel, who played 7 Test matches for the New Zealand team so far, moved from India to New Zealand with his family in the year 1996 and settled in Auckland, New Zealand. Were.

Ajaz Patel, who went to New Zealand at the age of 8, did well in domestic cricket there. Left arm spinner Ajaz Patel took 235 wickets in 65 first class matches. Patel has also said that he was a big fan of Daniel Vettori when he came to New Zealand.

Ajaz considers Vettori as his hero. At the same time, Ajaz Patel is very much influenced by Ravindra Jadeja in modern day cricket. Ajaz Patel says that Jadeja is my favorite player because I learn a lot from him.

Welcome to Jankari Ki Dunia. You visit right place for your query about Mittali Parulkar Biography. In this article, we will...
Read more
Biography

Are you want to know about ISRO Scientist Alakesh Kalita Biography. Then you visit right place. Welcome to...
Read more
Biography

Are you want to know about Nazneen Yasmin ISRO Scientist Biography. Then you visit right place. Welcome to...
Read more